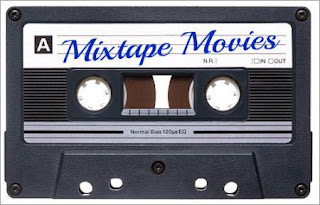 Somewhat delayed, here is my mixtape movies post. Andy over at Fandango Groovers Movie Blog has once again called for a blogathon and this time he has come up with an idea that resonate with me in more ways than one. Mixtape movies! Wow, what to do with this little nugget?

Yet again I find myself post a text written in English. Sorry in advance for any ill adviced choice of wording or badly written sentences. My previous attempt in English was for the blogathon My movie year.

Mixtape movies? It makes me think of three of my favourite pastimes; movies, music and best-of-lists. In my younger days before Blu-ray's, dvd's and even cd's, there were vinyl and audio tapes. I became an avid mixtape creator. It was an art and as with all art some of it turned out bad, some mediocre, but now and again I hit the sweet spot and something wonderful was created. You had two sides of the tape, each 45 minutes. You had to take care of the timing, not cutting of songs into little pieces, but also not leaving a long silence at the end. Also you had the two extremely important starters, the first song on Side A and the first one on Side B. And the order of the songs was so important. Scramble the songs, and you got a completely different experience. Ahh, good times.

I guess mixtape creation mostly was a "guy thing"? I dated a very nice but boring girl at the University back in the days. One of the first things she said to me was that she hated guys who made her all these mixtapes. I was dumbfounded. What was she talking about? I made my first mistake and kept silent, the prize could still be won, but alas soon our time was over. The last thing I did was to make her a mixtape of dark and brooding love songs and left it outside her dorm room door. LOL, I may not have been as cynical back then, but I did have humor.

1. Movies with no direct connection (star, director, source material) but that fit together or compliment each other.
2. Six movies, five plus one wildcard (a movie that doesn’t quite fit but still belongs).

My choice was guided by the memories of a lost era, an era of LP's and Maxell XL II, the eighties. In the end it was so easy to choose, I'll go with my favourite action movies of the decade! I might break the rules, but I stand by my list.

Kurt Russel as Snake Plissken was so cool. The movie was a revelation to me, it was maybe the first rated R action flick I saw at the movies. Donald Pleasence as the President.
You're the... Duke. You're... A-number one.

Snake Plissken only kept the position as the coolest guy on Earth until I saw Mel Gibson in The Road Warrior and the fascination of post-apocalyptic worlds grew even stronger. Still have the bug today.

This was such a rush, what a ride. First blood made sense to me, it was more a drama than an action movie, but it had a heck of alot of action in it. 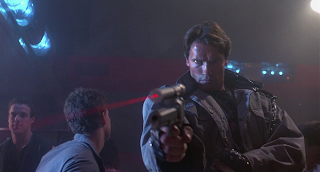 Do you remeber a time when James Cameron actually did good movies? And what about that robot, the Terminator. What a great villain! We have to keep our eyes on that guy. 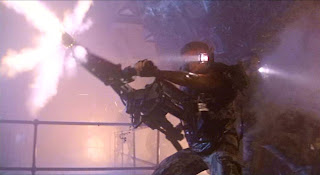 
And so the sensitive choice of my joker in the mix, my wild card. What about a great action flick from the nineties? 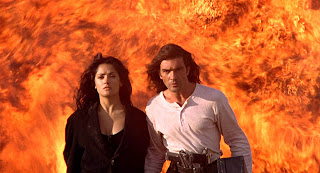 Robert Rodriguez made this explosion of color, violence and music. Salma and Antonio, you'll have to look a long time to find a hotter couple.


Now for the other contributions in this blogathon, have a look here. Thanks Andy for a nice initiative!
Upplagd av Henke kl. 12:01